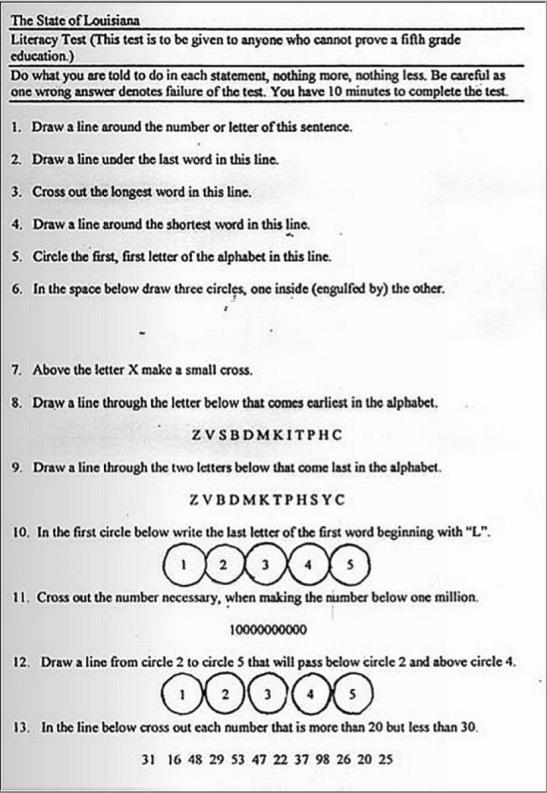 At the risk of getting too political for a writerly blog, I think it’s important to keep the past in transparent perspective. Nowadays we have voter I.D. laws which appear to be targeting a certain kind of voter, namely, the kind who tends to vote for Democrats and/or with a more liberal slant. In the past, we (or at least some of us) had literacy tests.

What we think of when we think of literacy is the ability to read. There are specific types of literacy, though, such as musical literacy, historical literacy, cultural literacy, and so on, but none of them is in play in this literacy test from Louisiana in 1964. What it’s trying to do is confuse the demonstrably literate, but it’s insidious in that you can just hear some George Wallace type saying, “Thisyeer test is meant to see if y’all can use logic and critical thinkin’, not jes to see if y’all can read.” That’d be well and good if white folk were held to the same standard as black folk, but one way you can tell it was aimed at blacks is that it was “to be given to anyone who cannot prove a fifth grade education.”

If you missed the story in Boing Boing recently, here’s a link to the original article in Slate that reprints the entire three-page test so you can take it yourself.

The test, by the way, had to be taken in 10 minutes, and one wrong answer meant that you failed. Given the intentional ambiguity written into many of the questions, you can just imagine how the local elections official would judge the correctness of an answer if the occasional test-taker were white.

You can mull over the politics of all of this, historically or in the current noxious environment. But take the test. I guarantee you’re going to get at least one question wrong.