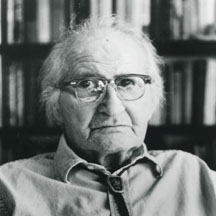 Apropos of yesterday’s post about the cult of youth in literature, I give you Henry Roth. He’s the antithesis of the young writer who gathers laurels before puberty.

Roth’s first novel, Call It Sleep, came out in 1934. It was something of a Jewish Studs Lonigan, following young David Schearl through tenement-era New York. I guess it did okay, though reviews were mixed. In any case, Roth didn’t publish another novel for nearly sixty years.

And the only reason he had the opportunity again was that Call It Sleep was republished in paperback in 1964, thirty years after its first appearance, as an unheralded Depression novel deserving a second look. It sold over a million copies. In the ’90s, Roth published a multi-volume continuation of Call It Sleep under the series title, Mercy of a Rude Stream, much of which came out after his death in 1995 at the age of 89.

During his hiatus, Roth practiced all kinds of occupations, including duck farmer. Obviously, though, he was always first and foremost — a writer.

The moral of the story? Believe.

4 comments on “Anything can happen”

This entry was posted on April 29, 2015 by Kevin Brennan in Writing and tagged Henry Roth, Literary fiction, writing.