A novel on Instagram? Author Blaise Lucey tells a story through pix and captions 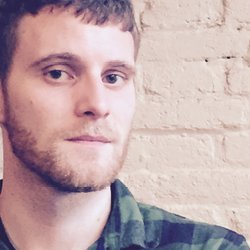 Why didn’t you think of it? A novel on Instragram? For that matter, why didn’t I think of it! Author Blaise Lucey thought of it, though, and his experiment in fiction/marketing, Luxury Coops, is live now on Instagram. You can follow along here.

I’ve been a fan of Lucey since I got into the lit-blog scene three years ago. He’s a writer, musician, tech strategist, and all-around digital philosopher who keeps his eye on everything from publishing trends to the latest in indie music. His new novel, Blest, was published March 15 by Alloy Entertainment – Powered by Amazon.

I asked him about his Instagram project and his new novel, but our discussion also gets into many areas of interest for indie writers, musicians, and artists of all types.

In my series, “Gatecrash — Liberating Creativity in the Age of Boilerplate Fiction,” I called for, among other things, a paradigm shift in how we think about and relate to novels — in effect, new kinds of novels. Your Instagram project fills the bill perfectly. How does a novel on Instagram work?

My thinking behind the Instagram novel was that people are constantly scrolling through photos on Instagram and reading captions. The pictures draw them in and, if they’re intrigued enough, they read the caption that goes along with it.

I view this as more of a way to promote the novel itself than marrying the novel to Instagram. So Instagram is a promotional channel, rather than a publishing platform.

The interesting thing about Instagram is that the hashtags really do enable discoverability in a cool way. Since Luxury Coops is set in New York, I can hashtag something “#NYC” or “#Brooklyn” and random people will find it. You can get likes and followers just by using the right hashtags.

Some of them may not read the text behind the photo (most of them, probably) but that’s okay. On digital, I think it’s important for authors to realize that nothing is going to be pure.

In coupling text to images, are you surrendering to the idea that readers have become too visual to invest in long-form fiction that requires deeper attention?

The short answer is yes. The longer answer is that I’m acknowledging how people read on a screen. Even the way we format blog posts is by formatting paragraphs so that they’re 1-3 sentences, rather than the paragraphs we find on print pages.

Photos keep the attention of readers who would otherwise read one paragraph and decide that it wasn’t worth it. The web has become far more visual than textual and I decided to see if photos help with the reading process. The jury’s still out, though!

Did the images come first, or the text?

Luxury Coops started in a notebook that I use when I’m sitting on the subway or in cafes in New York. I had a lot of character ideas and a lot of cool photos of New York, so I was wondering how I could merge them, somehow.

Sometimes, I take a picture and that serves as the prompt for the character. More often, I go through photos that I’ve already taken and choose one that suits the “micro-chapter.”

Did you take all the photos in the novel?

Yes. I think people still haven’t really adjusted to the idea that we can all essentially take some really cool photos and we can use them any way we want. For writers, this could really mean enhancing different parts of a story or telling a story in a fundamentally different way.

You mention in your blog post describing the project that Instagram limits the number of characters you can use in a caption. How did this affect your approach to the writing?

As I’ve started editing the chapters before posting them, I’m taking this into account a lot more. The character limit is 2,200… so that’s really only enough for a few paragraphs. It’s an interesting experiment in cutting prose down to only the bare bones. I also treat chapters as micro-chapters: i.e. using numbers like 1.2, 1.2, etc.

With only about 2,000 characters to spare, I also get the chance to do some interesting cliff-hangers. Some micro-chapters are just flashbacks of a different time. You can never tell what photo will get people to start reading the story. That means everything should stand on its own, too.

It sounds like you’re using a lot of different points of view in this novel, which might give it a kind of Spoon River Anthology feel but set in Brooklyn. Are the characters all part of the same story, or are they moving around independently?

The characters are all part of the same world. Chapters leap to different perspectives each time, even if that just means hopping over to the other side of the street to see how one character perceives the other.

Luxury Coops is all about how people perceive others and how we often fail to perceive how others look at us. That’s the eternal external/internal conflict: we define ourselves by our thoughts and feelings, others define us by our actions.

(Come back tomorrow for Part 2 of my interview with Blaise Lucey.)

11 comments on “A novel on Instagram? Author Blaise Lucey tells a story through pix and captions”