Check out Bill Pearse’s blog, pinklightsabre, where he’s currently inviting guest posts on ‘90s musical nostalgia, ’90s music, ‘90s nostalgia, or just music and/or nostalgia. Today he’s running my piece on a 1996 Elvis Costello concert. And, if you really want to get into it, you can listen to five numbers from that very concert at the Fillmore in San Francisco here: https://youtu.be/ATE0WRAWdhw. (The SF portion begins at about 26:20.) My wife and I are in the crowd, standing just feet from the stage and roaring with delight (and future nostalgia) with every chord.

Read some of the other posts too. They range from funny to moving to poignant. Great series, Bill!

Last week I announced a call for content for 90s nostalgia pieces, prompted by the 25th anniversary of the Nirvana release Nevermind, a great way for me to recognize some of my favorite readers and writers by celebrating your stories and writing.

Today’s featured writer is from one of my best blogger friends, Kevin Brennan. Be sure to read through to the end for links to his books and more. 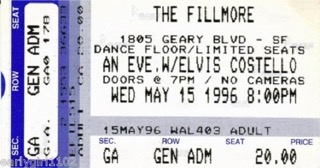 One nostalgic musical thread that weaves through my life is Elvis Costello.

I’d seen him many times over the years, from the late ‘70s on, but when we heard he was playing the Fillmore in San Francisco — just him and his Attractions piano player, Steve Nieve — I knew we’d have to spend the big bucks to see him there. It was the Fillmore. It was Costello. This was a done deal.

We paid about three times face…

This entry was posted on September 20, 2016 by Kevin Brennan in Publishing.