Susan Toy’s new one is here 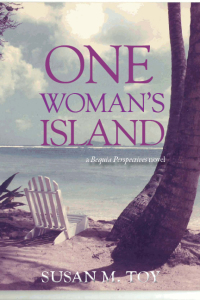 Good friend of the blog, Susan Toy, has just listed her new novel in the Bequia Perspectives Series on Amazon and Kobo. It’s called One Woman’s Island, and it’s a terrific follow-up to her first book in the series, Island in the Clouds. I know because I’ve already read it!

Just as in Island in the Clouds, Susan does a remarkable job in the new book of showing us what life on the Caribbean island of Bequia is really like — a cacophony of interaction between islanders and expats, rich and poor, honest and … not so honest. One Woman’s Island, like every good thriller, is also full of surprises.

Here’s the direct link to Amazon. And here’s a link to the book’s page on Susan’s blog.

I’ll let Susan tempt you with the blurb:

Running away from Canada, Maraina hopes to forget a failed marriage and the death of her husband by embarking on a whole new life. She moves lock, stock, and two cats to the small Caribbean island of Bequia. But the move brings more than she could have imagined. New friends ask her to help solve a recent murder in the expat community. And then there’s the problem of her neighbours, a young woman and her children. Seemingly abandoned by family and friends, Mariana believes they need her help! By becoming involved, Mariana is carried along from wanting to simply “live with the locals” to being overwhelmed by their culture, one so vastly different to what she had left behind in Canada that she doesn’t know who among her expat friends she can turn to for advice. So she carries on regardless and discovers that Bequia isn’t exactly the tropical paradise it had promised to be.

One comment on “Susan Toy’s new one is here”

This entry was posted on October 24, 2016 by Kevin Brennan in Publishing and tagged Amazon Kindle, Amazon.com, ebooks, fiction, writing.