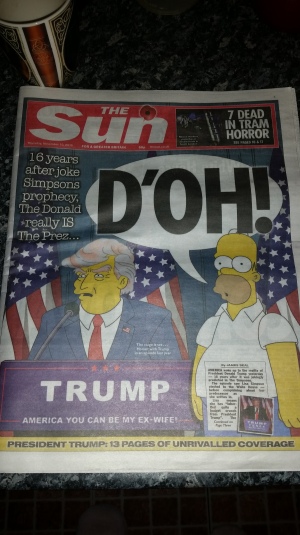 As the inauguration approaches, and I try to stifle a nauseous gag, I need to express a little frustration with something Anthony Bourdain said recently. It was on New Year’s Day that I read excerpts of an interview he did on Reason.com. Bourdain, he of CNN’s Parts Unknown (I had the title first!), thinks liberal attitudes caused the salt-of-the-earth backlash that has ushered in Trump.

The utter contempt with which privileged Eastern liberals such as myself discuss red-state, gun-country, working-class America as ridiculous and morons and rubes is largely responsible for the upswell of rage and contempt and desire to pull down the temple that we’re seeing now.

Though he includes himself in the charge, he misses the point completely. It’s not that we liberals hold white working-class, flyover-state people in contempt. Hell, many of us come from that world. I’m from Missouri — now one of the reddest of red states. I’m not a self-loathing Midwesterner. Instead it’s the ideas and opinions of a lot of white working-class people that I’m fighting against.

Bourdain doesn’t address these ideas and opinions. He uses the straw man argument that liberal elites are not hearing these ideas. We’re not listening. He says these simple working folk are tired of being talked down to by overeducated, pinheaded, pencil-necked brainiacs who think they’re better than them.

Many of these ideas boil down to a sense of insecurity, and much of the time white working-class people aim their rage at someone who is different from them. Immigrants, Muslims, Muslim immigrants, intellectuals. A white-supremacist group is trying to eradicate one Montana town of its Jewish residents. Oh joy. North Carolina has been diligent in suppressing the vote of its African-American population, so much so that a Federal Appeals Court declared that a recent voting rights law there “targets African Americans with almost surgical precision.” The U.S. Supreme Court agreed. Wisconsin is removing mentions of climate change from its Department of Natural Resources website. And don’t get me started on how, in the name of populism, the new congress will be repealing the Affordable Care Act and depriving millions of people of coverage (many of them, ironically, white working-class).

If Bourdain is right, we should have been listening to this subgroup of voters and, I assume, delivering on their demands. I don’t see how merely listening would have done the trick. Calling them “a basket of deplorables” was a terrible idea, but we all know that Hillary meant the blatant racists and misogynists, not the grassroots, ordinary Americans who are, by and large, people of good intentions.

Unfortunately much of their rage is misplaced. But when confronted with facts that contradict their sense of things, the resulting knee-jerk reaction causes the kind of political turmoil we’re about to live through for at least four years. I’m sorry, but it’s a fact that the top one percent have been vacuuming wealth from the bottom up for the past forty years, and it’s especially bad for people of color. Lashing out at liberals and the mainstream media only postpones a solution that will work. Revive the coal industry? You gotta be kidding me. Cut taxes for the rich? They fall for it every time. How about paying better wages? Somehow the populist rhetoric never gets around to that one. How about reviving the labor movement so we can fight on a more level playing field?

To give in to the odious ideas that have been velcroed to the white Rust Belt demographic — maybe without their knowledge or permission — is to succumb to the worst in us, the fear and prejudice that we’ve been fighting for the last fifty years. Accepting those ideas as reasonable is a terrible mistake.

So, Anthony — if you want to help undo all of the progress that’s been made since WWII, if you want to take a giant step backward, go ahead and give credence to Trump’s policies by criticizing their critics like Bill Maher. I, for one, believe that we can’t normalize destructive ideas by putting them on the same table with humanistic but apparently pie-in-the-sky notions like economic equality, true religious freedom, universal education (and health care), and racial cooperation.

One idea that we’ve lost track of in this country is that of the commonweal. The best course for all of us. And the sooner we find our way back to that as our prime motive, the sooner we’ll stop heading toward self-destruction by pitting one group’s interests against all others while the kleptocrats pick our pockets.

This entry was posted on January 18, 2017 by Kevin Brennan in Et alia and tagged Armageddon, politics.