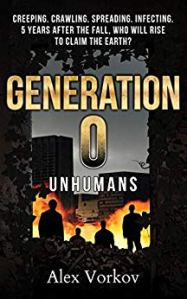 It’s worth emerging from my blogging hiatus to let everyone know that Alex Vorkov’s Generation 0: Unhumans is now available on Amazon.

Maybe you remember my interview with Vorkov in 2016, when volume 1 of the Generation 0 series was published as Awkward Stage. He has since retitled it Generation 0, and now in the second volume we rejoin our adolescent heroes as they try to make their way in a world where all of the adults have suddenly died. You can just imagine some the scrapes they get into.

But the remarkable thing is—take it from me—you can’t imagine the scrapes they get into, nor the ways they try to get out of them. Vorkov is such an inventive writer that it’s safe to say there are more surprises in these two books than in five hundred boxes of Cracker Jacks.

And the punishment these intrepid kids take—and dish out! Yes, the action is violent. Maybe even ultra-violent at times, and I bet Anthony Burgess wishes (rest his soul) that he’d come up with some of this stuff for A Clockwork Orange. Come to think of it, these novels have quite a bit in common with A Clockwork Orange, involving, as they do, bands of roaming teens vying for supremacy in a dystopian land without competent authorities to stop them.

There are also moments of profound kindness and compassion. Unhumans need love too.

I’ll reveal just one thing here, and that is that I edited this book. I have no idea what Vorkov is going to do next, but he’s such a terrific writer that I hope he gives me the chance to edit that one too.

Start with the first volume so you can get acquainted with the cast.  Then move on to Unhumans as soon as unhumanly possible so you can keep the momentum going.

Even if you don’t typically read dystopian lit, you’ll find Vorkov’s prose to be dazzling and the stories to confront some of the trickiest moral themes in fiction.

These aren’t zombie books, by the way. No vampires either. Every awful act is committed by red-blooded human beings.

This entry was posted on July 31, 2018 by Kevin Brennan in Writing.