As 2018 coasts to an end (it ran out of gas months ago, but at least it’s been heading downhill), I thought I’d toss one more post on the pile to bid it farewell.

Regular readers know that I stopped blogging habitually this year, back in April, because I’d been at it for five years and finally came to understand that it wasn’t working as the book-promotion vehicle I thought it could be. Back in ‘013, people said YOU MUST BLOG, so I blogged. And I blogged pretty much every day, garnering a stable of readers I could have over for dinner and fit comfortably in my living room. I’m so grateful to them. To you.

I had about five years’ worth of amusing things to say, then it got repetitive, I think. And I wasn’t moving any books.

Now I blog when I have something fun or interesting to say, and that makes it actually enjoyable.

Back to 2018, which is now the third year in a row that has completely sucked. Not for me personally, but for the country. We’re like the Titanic, but we hit the iceberg in Nov. 2016 and the sinking is in progress. Not enough life vests. Plenty of red hats. I feel like a member of the string quartet that continues to play even as the deck slants steeper and steeper.

But 2018 ends for me personally with a fun story, and I’ll always remember it this way. A couple of weeks ago I bought Peggy Seeger’s memoir, First Time Ever, and 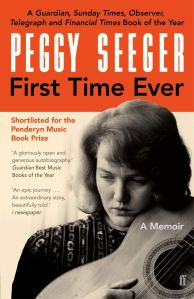 was delighted to receive a signed copy. There in the front matter, in black Sharpie: Peggy (with a little musical note symbol). I was so excited I had to write her an email via her website.

Why? Because back in ’77, when I was going to school in London, I used to go to the Singers’ Club at the Bull and Mouth pub (near the British Museum) every Saturday night to watch Peggy and her husband, Ewan MacColl, play and sing English and American folk songs, which I was heavily into at the time. What a treat, and I’ve written about it here before. I even took advantage of the open mic time to sing in front of the two of them once or twice, a budding young busker. Peggy, you probably know, is Pete Seeger’s half-sister but has built her own stellar reputation by walking the authentic walk for sixty years.

Ewan wrote the song, “First Time Ever I Saw Your Face,” for her. Roberta Flack made sure they were set for life.

To my surprise, the administrator of Peggy’s website wrote me back to say he was forwarding my email to her. And the next day … she replied herself.

She thanked me and said the stanza I’d sent her from my own folk song, written at the time, was good:

I am a London fireman,
Now hear me speak.
I risk my life for forty pounds a week.
Now I am no complainin’ man,
But you’ve got me in a cage,
Forty quid a week, my friend,
Is not a living wage.

She wished me a good holiday season, and that was that. I was stoked.
I wrote her back and included the ebook of Yesterday Road as a thank you. She wrote back to say she doesn’t have a Kindle because she doesn’t care for

Amazon—a common-enough sentiment these days—so I wrote back to offer the brand-new paperback edition, if she’d give me the address of her publicist to send it to.

Now she wrote once again, saying “Delighted to receive your book,” and gave me an address in New Zealand, where she’ll be till the end of February. It’s summer down there.

So, early in 2019 I’ll be sending a signed copy of Yesterday Road to Peggy Seeger in Picton, New Zealand.

How’s that for a great way to start a new year? 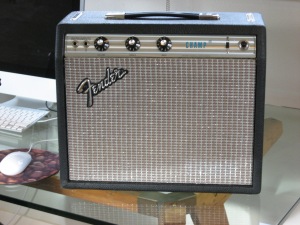 See how 1977 keeps recurring in my life? I was twenty. I was born even as Peggy Seeger first played the Gate of Horn in Chicago in the spring of ’57. Now I’m sixty-one and she’s eighty-three.

And the wheel goes round and round.

Happy New Year, friends. If you have some life-affirming year-end tales, please share them in the comments!

This entry was posted on December 31, 2018 by Kevin Brennan in Et alia and tagged inspiration.