The pieces are falling into place … 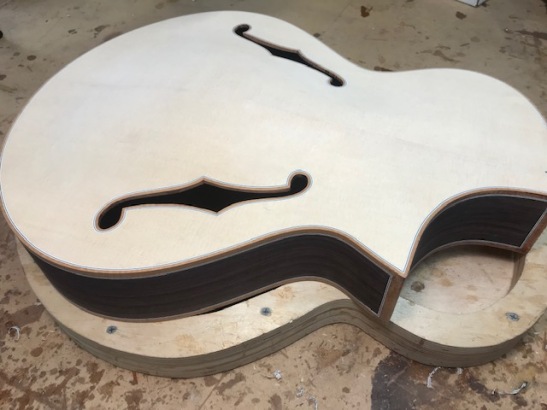 What a terrific distraction from the frustrations of American life in late 2019, when it feels like almost everything is built on a foundation of Jell-O. My guitar is coming along beautifully!

Just think: A little over a year ago, I was holding individual pieces of wood in my hands–maple boards, strips of rosewood, a bat-sized chunk of mahogany–and now it’s all fulfilling its destiny as a handmade musical instrument that doubles as a work of art.

Luthier Maegen Wells, of Forestville, California, has had a busy year, not just building guitars like this one but also appearing at popular guitar shows, where luthiers, musicians, and guitar nerds like me gather to gawk at these beauties. She also built an instrument for, and performed with, Mark Goldenberg, a pro who has played with everyone from Jackson Browne and Linda Ronstadt to Bob Dylan. And recently she landed a job reshaping the neck of one of Sean Lennon’s guitars. 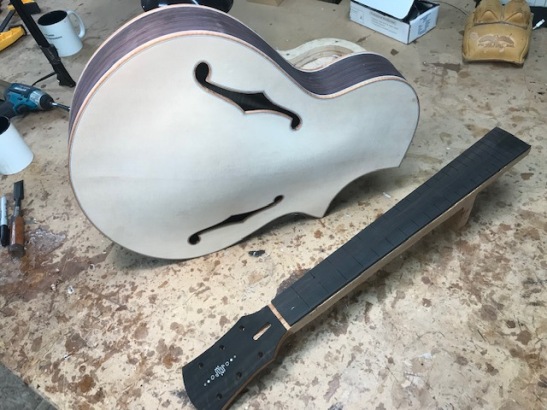 In just a few weeks, I’ll be cradling this lovely box on my lap and making some pretty noises with it (at least I hope so!). To get ready, I’ve been working up some of my own arrangements of favorite tunes like “Alfie,” “Edelweiss,” “Waltz For Debby,” and “Suicide Is Painless.” What a pleasure it’s going to be to hear them coming out of that pretty box.

I had seen a photo of one of Maegen’s other guitars before it was stained and lacquered, and I loved the look of the natural wood so much that I asked her not to color mine. It’s going to look pretty much like these pictures, with all that gorgeous contrast between the spruce top, rosewood sides, maple back, and mahogany binding.

Folks, all I can say is, this is a dream fulfilled, and since I’ve been self-employed for so long I’m thinking of it as an early retirement gift. Beats a damn gold watch, I’d say.

Maegen’s skills are completely badass–a word I know she appreciates. But my wife’s generosity through all of this (life, as well as the guitar) is max-badass.

We celebrated our twenty-fifth wedding anniversary yesterday, by the way.

3 comments on “The pieces are falling into place …”

This entry was posted on October 23, 2019 by Kevin Brennan in Music and tagged Guitar, inspiration, memoir, music.