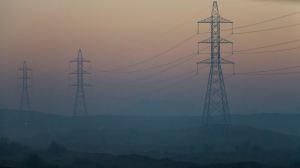 We were actually grateful the lights went out when they did. The estimate had been that they’d be cut six hours earlier.

They didn’t come on again till Wednesday at about 11 a.m., so that, by my count, we were without electricity for 87 hours. Which, let me tell you, is no Fun Meal.

What’s going on in California is unprecedented. The utilities, including ours—PG&E—are preemptively “de-energizing” their lines when they anticipate high-wind, low-humidity weather patterns, mostly because problems with their lines have been found to have caused some of the most devastating wildfires in the state’s history.

Californians are irked that PG&E, for one, has a rep for having ignored the safety of its infrastructure in favor of profits and shareholder return. It took a judge in their bankruptcy case to nix the $16 million executive bonus plan they had in mind for themselves. The new CEO’s compensation incentives are supposedly tied to safety “metrics,” but you’d kind of think that should be built into the job description anyway.

Meanwhile, they get to turn the juice off whenever they sense that they’ll be held responsible for wildfires that get sparked by power lines in our burlap-dry forests. So far, this fire season, it feels like they’re a little trigger happy with that off switch.

Being without power for 87 hours is not at all interesting. You start with a stiff upper lip—“We’ll make an adventure out of it!”—but by the third night you’re a whimpering mess trying to negotiate with the cosmos just so your frozen chuck roast won’t go bad. Not to mention that it gets cold at night and the only way to stay warm after dark is to spend an hour in the bathtub and go straight to bed.

The first two nights we played Scrabble by candlelight before the bed and bath thing. On the third night we did the bath thing and went to bed without the Scrabble … at 7:30. We’d only intended to nap for a while, but decided after an hour that it was too flippin’ cold to get out of bed. We stay there almost 12 hours.

Luckily I did rescue that chuck roast by making a pot of chili with it on the Friday before the power outage. Two deli containers kept it fresh in our cooler. We learned, among other things, that two bags of ice in a cooler last exactly three days and four nights—just barely. At the end of it, we lost some mayonnaise, milk, whipped cream, and Mocha Mix. All in all, not too bad.

What we really lost was our innocence. Or the illusion that we’re fairly hardy, we-can-handle-it types. Turns out we’re whiny little babies who are overly dependent on our electronics.

I was glad we’d hung onto the camp stove we bought a few years ago, not to mention the 27-year-old Sony boom box that got us through the otherwise silent evenings. Between hot tea in the morning and classical music at night, it was enough to keep us from going mad.

The takeaway of this story is that nothing is guaranteed. You take things for granted you don’t even know you take for granted, and we happen to live in a time—all across this country—when the things we’ve counted on are on shaky ground. Key things like electricity, water, government. Whether it’s the natural end-times for capitalism, like Marx might have predicted, or just the cooked-in fallibility of human judgment, we won’t know for a while, but this experience has shown me in a pretty stark way that life could get awfully gritty here in the early 21st century.

And the futurists snookered us into thinking it was all just going to get better and shinier.

As Blazes Bolan would put it, Weird flex but okay.

This entry was posted on October 31, 2019 by Kevin Brennan in Et alia and tagged whatever.