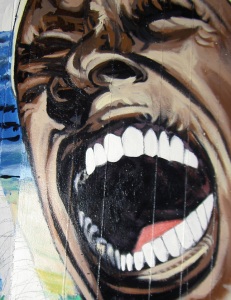 It’s one of those times when the neighbor’s dog is barking nonstop and hitting that sound frequency that causes a wad of nausea in my gut so that I keep having to bend down and put my head between my knees while I think of ways of killing the animal that would be ethical, considering the pain and suffering he’s caused and the recalcitrance of the neighbors, who by the way also love country music and play it blaringly loud almost every day in their yard, which also by the way causes the same wad of nausea and I can’t concentrate on anything else except that it’s a goddamn good thing I don’t own a goddamn gun because I’m pretty sure I’d rack up a round and walk over there to blast the radio to Kingdom Come and take out the goddamn dog while I’m at it, which is exactly why I make it a point to not ever buy a gun, man, given my fairly fragile stomach for the everyday irritations the neighbors dish out, because I really don’t want to spend the rest of my life in an orange jumpsuit while they, assuming I didn’t accidentally blow them away along with their goddamn dog, suffer no consequences for their recalcitrance where the barking and country music are concerned, leaving me to sit inside with the windows sealed shut and stewing in my own nauseous juices, which is just. not. fucking. fair.

Still, I believe that people are basically good.

This entry was posted on April 6, 2021 by Kevin Brennan in Et alia, Publishing and tagged life, whatever.