You’ve got to get obsessed and stay obsessed

I mentioned a couple of weeks ago that I’ve been sending out flash fiction to little online mags for the past year. And I’ve garnered eight acceptances in that time, albeit through a pretty grueling regimen. (Here’s the latest, just out today!) As you can imagine, researching places to send stuff is time-consuming and sometimes frustrating, especially since you might land on an ideal zine only to learn that it’s closed to submissions right now. Often they don’t tell you when they’ll open again. You have to keep checking.

Since September 2020, I’ve submitted (as of this very moment) 373 times. I have about 25 stories I’m peddling, and some of them have been rejected more times than I want to admit, but this is how the game is played so I’m still in with both feet. At any one time, about fifty decisions are pending, just because some mags are slower than others, but to make sure I don’t lose my mojo waiting around, I send one or two out every weekday. And, as is totally normal for any writer, I get at least ten rejections each week.

The rejection language always fascinates me. Sometimes it’s apologetic. Sometimes rough and blunt. “This isn’t right for us.” Now and then an editor adds a few words of encouragement, asking to see something else. But by and large, especially via the literary tracking site Submittable, the rejection notes are boilerplates that give you nothing to go on as to why a piece “wasn’t right” for the zine. I confess, I have a form rejection note I use at The Disappointed Housewife because, for one thing, time is of the essence, and for another, some pieces really don’t belong in that outlet. There’s nothing wrong with them technically. They just belong somewhere else. 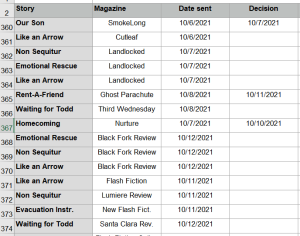 By the way, I keep a bigass spreadsheet (above & below) to keep track of all these submissions. One page shows the magazines and relevant dates, and the other is structured on the stories so I can see where each one’s been sent. I know it looks depressing to see all those red check marks (rejections, but the pic shows a couple of accepts too!), but when you consider that eight of my 25 stories have been picked up, it’s not a bad batting average. Any major leaguer would be happy to be hitting .320 these days.

One interesting phenomenon from all of this is that my regimen and record keeping have made me want to write more of these pieces. When you’ve exhausted the submission possibilities for a story, there’s another ready to join the ranks and hit the battlefield. I find that I’m always on the lookout for a good idea for a new piece, so much so that I might never get to a lot of them.

In the end, it’s all about enthusiasm. Generate it any way that works for you.

(BTW, the title of this post comes from The Hotel New Hampshire by John Irving. It’s been a guiding motto of mine ever since I first read that book.)

[Photo by GRÆS Magazine on Unsplash.]

This entry was posted on October 14, 2021 by Kevin Brennan in Writing and tagged writing.